The boys will be back on Blu-ray this September.

In an early announcement to retailers, Warner Brothers is set to release 'Entourage: The Movie' on Blu-ray on September 29.

Movie star Vincent Chase (Adrian Grenier), together with his boys, Eric (Kevin Connolly), Turtle (Jerry Ferrara) and Johnny (Kevin Dillon), are back… and back in business with super-agent-turned-studio head Ari Gold (Jeremy Piven). Some of their ambitions have changed, but the bond between them remains strong as they navigate the capricious and often cutthroat world of Hollywood with hilarious antics.

The Blu-ray combo pack will feature 1080p video, lossless 5.1 audio, and supplements include: The Gang - Still Rockin' It; Hollywood, Baby!; The Making of Hyde; Deleted Scenes; Gag Reel; Meet the Newest Member of Entourage; and Lucas Ellin is Jonah Gold.

You can find the latest specs for 'Entourage: The Movie' linked from our Blu-ray Release Schedule, where it is indexed under September 29. 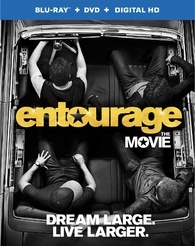