Blu-ray Gives a Lesson 'How to Be Single' in May

The romantic comedy is headed for Blu-ray next month.

In an early announcement to retailers, Warner Brothers says 'How to Be Single' will arrive on Blu-ray on May 24.

Based on the novel of the same name, an author writing a book about bachelorettes becomes entangled in an international affair while conducting hands-on research abroad. The author and her friends are single New Yorkers who would all much rather be in committed relationships. On a whim, Julie, the writer, decides to write a book about the experiences of single women around the world. She takes a leave of absence from her job as a publicist, jets off to France, and encounters a man named Thomas, who is in an open marriage. Even as she continues her travels to other countries, Julie longs for Thomas, who meets up with her again in Bali, jump-starting a torrid affair. While Julie is off seeing the world, her friends are back in New York, growing closer to each other as their lives develop in wild ways.

You can find the latest specs for 'How to Be Single' linked from our Blu-ray Release Schedule, where it is indexed under May 24. 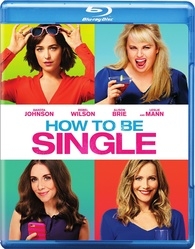