'Batman: The Killing Joke' Bound for Blu-ray in August

The R-rated animated film featuring the voices of Kevin Conroy and Mark Hamill arrives on Blu-ray in August.

In an early announcement to retailers, Warner will be releasing 'Batman: The Killing Joke' on Blu-ray on August 2.

Based on the acclaimed graphic novel of the same name, Batman: The Killing Joke takes a journey into the dark psyche of the Clown Prince of Crime – from his humble beginnings as a struggling comedian to his fateful encounter with Batman that changes both of their lives forever. Years later, and now escaped from Arkham Asylum, The Joker devises a plan to prove that one bad day can make anyone as insane as he is – setting his sights on Commissioner Gordon. It’s up to the Dark Knight to put a stop to The Joker’s latest scheme and save one of Gotham City’s finest. Following a gripping prologue introducing Barbara Gordon’s heroic adventures alongside Batman as Batgirl, Batman: The Killing Joke stays true to the authentic tale that has held fans’ imaginations for nearly three decades – spotlighting the birth of a Super-Villain, the fortitude of a Super Hero and the punchline that will leave you speechless.

Specs have yet to be revealed, but supplements include: An exclusive sneak peek at the next DC Universe Original Movie; Featurette – “Batman: The Killing Joke – Madness Set To Music” – Jim Gordon must bear witness to the most disturbing images any father could imagine while a maniac entices his break from sanity in song. This documentary looks at the step-by-process of one of the most crucial scenes in Batman: The Killing Joke, including the methodology James Tucker used as he storyboarded Brian Bolland’s stunning work for the screen; Dynamic Music Partners composers/lyricists’ creative merging of original music with the poetic words from the graphic novel to provoke the desired feelings and emotions for this critical scene; and actor Mark Hamill’s physical, devoted performance to capturing the world¹s most notorious Super-Villain in song; Featurette – “Many Shades of Joker: The Tale of The Killing Joke” – Brian Bolland’s artwork is instantly recognizable to comic book enthusiasts all over the world. Known for his amazing cover art, it was a rare inclusion into the body of a graphic novel, Batman: The Killing Joke, that helped the perennial story of Batman and The Joker remain a fan favorite for decades to come. Combined with the graphic novel’s original script – which is more than just the telling of a story, but an intricate map explaining every stop along the way to the end of a fantastic journey – this documentary reveals the artistic process behind The Killing Joke’s distinct style. We’ll learn how artists and writers excelled at conveying story and human emotion one panel at a time, mesmerizing readers with unforgettable stories and humanized depictions of heroes and villains. And why after nearly 30 years in print, Batman: The Killing Joke is more thought provoking than ever, as its socio-economic themes are relatable to generation after generation; From the DC Comics Vault – Two 22-minute episodes: The New Batman Adventures - “Old Wounds” and Batman: The Animated Series - “Christmas with The Joker”; and the Numbered Deluxe Edition will add an exclusive limited edition The Joker figurine.

You can find the latest specs for 'Batman: The Killing Joke' linked from our Blu-ray Release Schedule, where it is indexed under August 2. 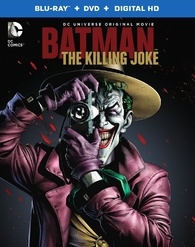 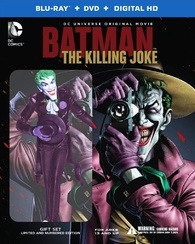