The horror prequel arrives on Blu-ray just in time for Halloween.

In an early announcement to retailers, Warner Brothers is working on 'Annabelle: Creation' for Blu-ray on October 24.

In Annabelle: Creation, several years after the tragic death of their young daughter, a doll maker and his wife welcome a nun and several girls from a shut-down orphanage into their home. They soon become the target of the doll maker's possessed creation, Annabelle.

You can find the latest specs for Annabelle: Creation linked from our Blu-ray Release Schedule, where it is indexed under October 24. 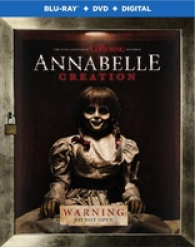