43 more episodes of the hit Cartoon Network series are headed for Blu-ray in October.

In an early announcement to retailers, Warner Brothers is working on 'Adventure Time The Complete Sixth Season' for Blu-ray on October 11.

In Adventure Time, a boy named Finn and his adoptive brother Jake, a wise, shapeshifting dog, are best friends who set out on a series of wondrous adventures in the post-apocalyptic land of Ooo. The Land of Ooo, which is a mystical place filled with mountains, forests, winding rivers and cities, is home to several strange and unique characters. Throughout their captivating adventures, Finn and Jake encounter several of Ooo's most extraordinary inhabitants, including Princess Bubblegum, The Ice King, Flame Princess, Lumpy Space Princess and Marceline the Vampire Queen. Their exciting journeys together through this whimsical landscape serve as the plot of the hit animated series.

One of Cartoon Network's most popular programs, Adventure Time originally premiered in 2007. Since its debut, the series has received critical acclaim, earned multiple Emmy awards and has become an enormous hit among audiences of all ages. Each Adventure Time premiere reached 2.5 million persons 2+ during season 6.

Adventure Time was created by Pendleton Ward (The Marvelous Misadventures of Flapjack) and is produced by Cartoon Network Studios and Frederator Studios. The series features Jeremy Shada as Finn and, John DiMaggio as Jake.

Specs have yet to be revealed but supplements will include: Food Chain Featurette; Song Demos; Animatics; and Galleries.

You can find the latest specs for 'Adventure Time The Complete Sixth Season' linked from our Blu-ray Release Schedule, where it is indexed under October 11. 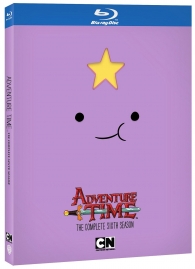