Finn and Jake will return to Blu-ray in July, and you can pre-order the show now.

Are you a Jake fan? Great! Because Season 5 has a ridiculous amount of momentous Jake moments!! Like when he became Jake the Dad. That time he tracked down Jake Jr.'s kidnapper (sort of). Who can forget the masterpiece that is his Most Delicious Sandwich?! And he shares these moments with his best bro Finn and friends in a total of 52 episodes, all for you!

Currently in its sixth season on Cartoon Network and already renewed for a seventh, Adventure Time is the #1 rated show among boys 6-11 and is the second highest rated show among boys 6-14 and kids 6-14, according to Nielsen Media Research. As Cartoon Network's #1 show, it has been lauded by critics, received multiple industry awards and has emerged as a fan-favorite brand for fans of all ages since its April 2010 debut. Supported by a highly-passionate fan base that includes more than 16 million Facebook fans, the Adventure Time franchise enjoys a strong retail presence with licensed apparel, accessories, comic books, calendars and more. The wide variety of popular items available has led to more than $150 million in sales worldwide.

The two disc set will feature 1080p video, a Dolby Digital 2.0 soundtrack, and supplements include an exclusive featurette.

You can find the latest specs for 'Adventure Time: The Complete Fifth Season' linked from our Blu-ray Release Schedule, where it is indexed under July 14 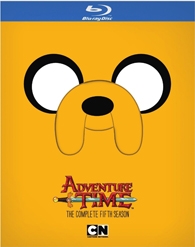