In a new promotional flyer housed inside next week's HD DVD release of 'Ultimate Matrix Collection,' Warner is touting an October arrival date for the highly-anticipated upcoming next-gen release of 'Blade Runner.'

Ridley Scott's seminal sci-fi classic has long been available on video, but for remained for years as one of the studio's most highly-requested library titles to receive the special edition treatment.

After over a decade of legal wrangling, Warner announced last fall that the road was finally cleared for a deluxe version of 'Blade Runner' to hit standard-def DVD, Blu-ray and HD DVD sometime in 2007, to mark the 25th anniversary of the film's original theatrical release.

However, no details have since been forthcoming -- until now.

Inside copies of the 'Ultimate Matrix Collection' (streeting this Tuesday, May 22), Warner has included the following advert that gives the first official confirmation of an arrival window for 'Blade Runner' (which is now being dubbed 'The Essential 25th Anniversary Edition'): 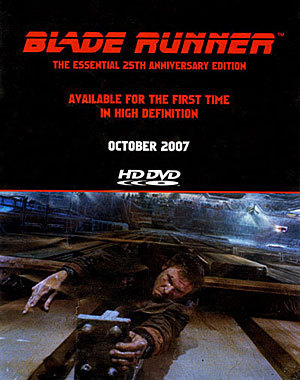 We've contacted Warner in hopes of more details, but as of now, the flyer is the only taster fans are going to get -- at least until the full announcement for 'Blade Runner,' which the studio says should arrive "later this summer."

Still, it's exciting news for 'Blade Runner' cultists, who have waited over two decades for what is sure to be the definitive release of the film on Blu-ray and HD DVD.

We've already listed 'Blade Runner' under the "Release Dates Pending" sections of our Blu-ray Release Schedule and HD DVD Release Schedule, and will add an official street date as soon as it is announced.

Needless to say, watch this space!

Discs mentioned in this article: (Click for specs and reviews)
The Ultimate Matrix Collection (HD DVD)