Last week, High-Def Digest was invited to attend a hands-on demonstration of VIZIO's latest home theater products. The event was held at the Gansevoort Hotel in New York, where the company offered a one-on-one look at three new audio systems along with their impressive 2014 M-Series HDTV line.

Aimed at highlighting the company's "Beautifully Simple" philosophy, the showcase put VIZIO's gear in direct comparison with similar offerings from their competitors, letting us see and hear the differences. So, just how well did they stack up? Should you start getting excited about VIZIO's new products? Well, here are our full impressions!

The first demo showcased the company's upcoming 2.1 Sound Stand, the S2121w. Part of a new category of audio products, the VIZIO Sound Stand is geared toward delivering high quality audio in an even more compact form factor than a traditional soundbar. Packed with 101 dB of volume at less than 1% harmonic distortion and designed to sit directly under televisions up to 60 lbs and 55-inches in size, the Sound Stand is ideal for users looking for a powerful, but still space saving upgrade to integrated TV speakers.

The S2121w features a 2.1 configuration with 2.75" full range stereo drivers and an integrated 5.25" subwoofer rated at 55 Hz with a backwards firing port. In addition, the Sound Stand includes Bluetooth for wireless audio streaming, and Dolby Digital, DTS TruSurround, DTS TruVolume, and DTS Studio Sound support. Likewise, the device comes packaged with everything customers will need for easy and painless installation, including a power cable, 3.5mm to RCA audio cable, an optical digital cable, a coaxial digital cable, a Quick Start Guide, and a remote control with battery.

For demonstration purposes, VIZIO set the S2121w against the Bose Solo and the Samsung HW-H600. Both are similar sound stand devices aimed at offering compact audio solutions that sit under your TV with a pedestal design. To show off each speaker, an action scene from 'Sherlock Holmes: A Game of Shadows' was used. Each rival unit was set at the max power setting before distortion became apparent, and the VIZIO was set at about 60 percent output. Since the demo was tailored toward showing off the Sound Stand's bass response, the sequence featured a lot of low frequency activity with frequent explosions. 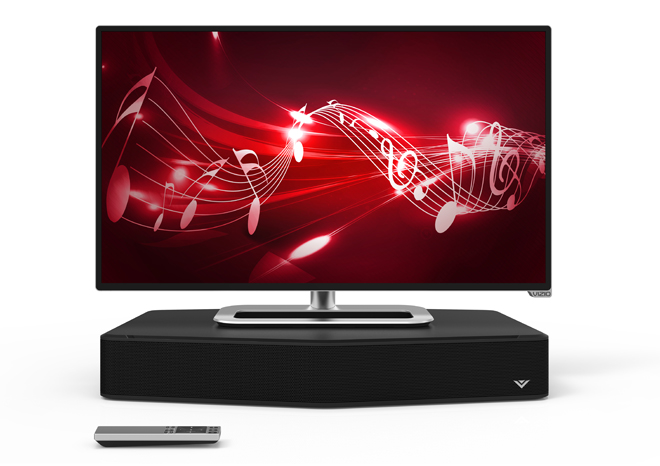 While the Samsung offered a relatively deep and heavy sound, it still wasn't particularly full or impactful. For its part, the Bose seemed to give a more well-rounded experience, with solid bass activity and cleaner highs, though there was a slightly muddy quality to the audio. Finally, the VIZIO held its own very well, turning in a similar if not more robust performance to the Bose, utilizing its built-in subwoofer well to provide some comparatively strong kick. According to 3rd party testing, the S2121w actually provides bass levels of +5 dB (at 63 Hz) and +15 dB (at 40 Hz) above the Samsung HW-H600 and the Bose Solo. See the graph below for the full comparison measurements. 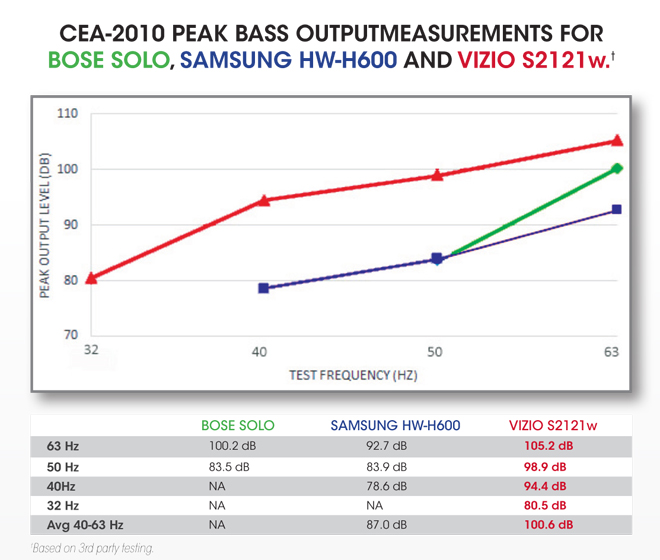 With that said, given my limited time with the speakers, I had a hard time deciding whether the VIZIO really offered a sizeable improvement over the competition since all three seemed to have strengths and weaknesses. And though all of the devices turned in superior sound compared to a TV's standard speakers, they really could not compete with full soundbar systems. Of course, further testing and demo material would be needed to really offer a definitive opinion, and we're hoping to get a retail review unit soon. Pricing has not been announced yet, but the 2.1 Sound Stand is expected to hit stores in July.

Next up, VIZIO showcased its latest soundbar systems, the 54-inch S5451w-C2 and the 38-inch S3851w-C2. The S5451w-C2 54" 5.1 Home Theater Sound Bar is geared toward customers with 55-inch HDTVs or larger. The soundbar offers 104 dB of audio with less than 1% total harmonic distortion and discrete left, right, and center channels. In addition, the system comes complete with separate rear satellite speakers and an 8-inch wireless subwoofer for a bass response as low as 35 Hz. 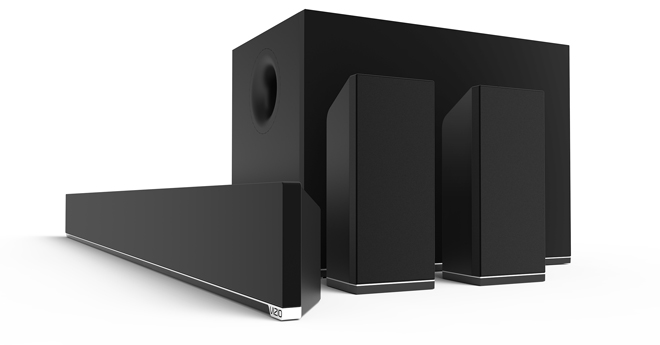 Meanwhile, the S3851w-C2 38" 5.1 Home Theater Sound Bar is designed to be paired with HDTVs that are 42-inches and larger. The device also features separate rear satellites and a wireless subwoofer for up to 100 dB of sound. Both soundbars offer Dolby Digital and DTS Digital Surround support, and the 54-inch model adds in integrated aptX Bluetooth audio coding technology for high quality wireless music streaming from supported devices. 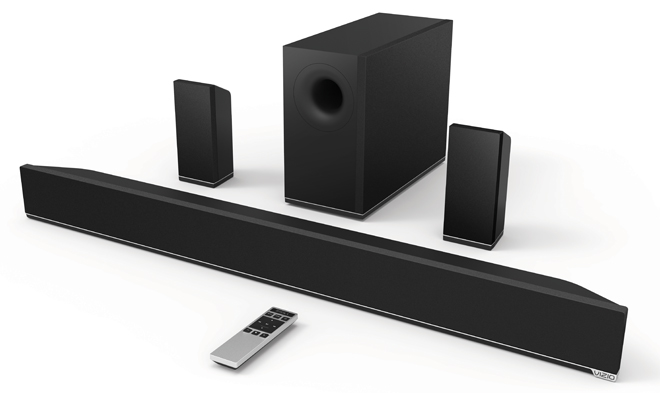 To show off the 38-inch system, VIZIO played an action scene from Zach Snyder's 'Sucker Punch.' The sequence was once again full of many low frequency effects and lots of discrete surround cues, offering an enveloping soundstage that was perfect for highlighting the soundbars' range. While a hotel room environment isn't exactly the best place to demo a sound system, even at the limited volume setting, the soundbar was quite powerful and immersive. The front soundstage offered a clear sense of directionality throughout the single unit speaker and the bar worked well with the dedicated rear satellites and wireless subwoofer to create a seamless experience.

The 54-inch model was demoed next, and this time a scene from James Cameron's 'Avatar' was used. Immediately, the audio was noticeably beefier than the 38-inch unit. Bass had a more robust presence and the larger soundbar offered a wider front soundstage. Again, despite having to keep the volume and woofer dialed down for the sake of neighboring hotel guests, the unit produced some impressive kick and I came away very impressed by my relatively short time with the system. 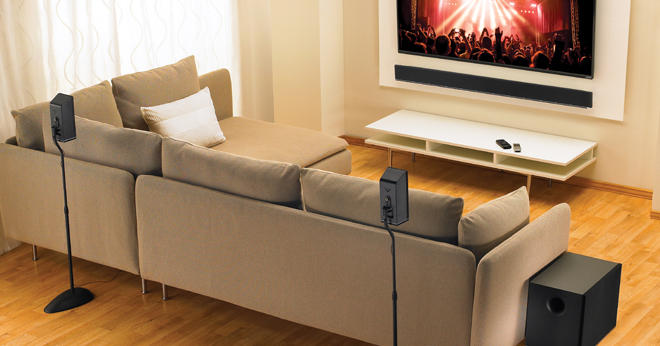 In addition to the 5.1 film tracks, VIZIO also provided an example of the 54-inch model's aptX Bluetooth streaming support, which allows for wireless playback of high resolution audio. For the demo, a stereo AIFF music track was streamed from a tablet. The song was then matrixed through the soundbar's processing to 5.1. Much like the movie samples, the music sounded very good, and the 5.1 matrixing was well done, spreading the instruments nicely around the room with a convincing sense of discrete separation. Again, we're hoping to get samples of both soundbars for full reviews soon, but the brief demonstration definitely left me wanting to hear more. The 54-inch S5451w-C2 is currently available for $500 and the 38-inch S3851w-C2 will be available in late july for $280.

Finally, VIZIO whisked me off to a separate room where they had a 60-inch M602i-B3 M-Series HDTV setup. For comparisons sake, a Samsung UN60H7150 60-Inch HDTV was also displayed side-by-side with the VIZIO. With a much appreciated emphasis on picture quality, the M-Series is designed to give home theater enthusiasts an impressive bang for their buck, offering full-array local dimming and smart TV features for an affordable price. 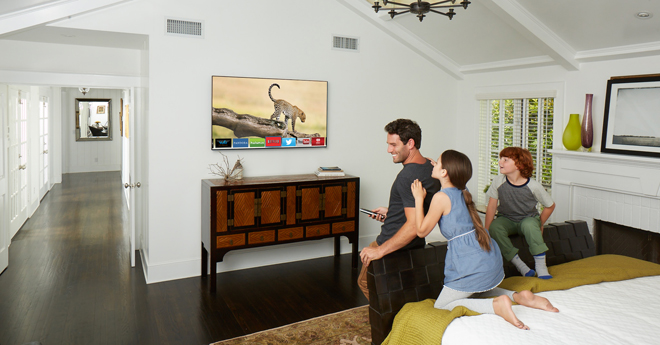 The M-Series ranges in size from 32-inches to 80-inches and features full-array backlighting with local dimming and up to 36 active LED zones. This allows the backlight to adjust its intensity in individual zones based on the content on screen, resulting in better contrast, superior uniformity, and deeper black levels. In addition, the TVs also offer Active Pixel Tuning and Clear Action Rate 7202 technology for improved detail and motion. Finally, the M-Series includes full smart TV options with integrated Wi-Fi and a backlit QWERTY keyboard built right into the remote, giving customers access to popular apps like Netflix, YouTube, and Spotify.

While local dimming technology has been around for several years, many previous models have been prone to artifacts like blooming and poor off-angle viewing. Likewise, many manufacturers have been opting for edge-lit implementations over full-array designs, which lead to far inferior results. With the M-Series, VIZIO is making full-array local dimming one of its main priorities, and the company highlighted the technology throughout the demo, detailing its advanced algorithm used to combat blooming and crushing. The company even proudly advertises the amount of active LED zones available on each model -- something other company's rarely disclose. The 60-inch model on display for the demo uses 32 active LED zones configured in an 8x4 grid. 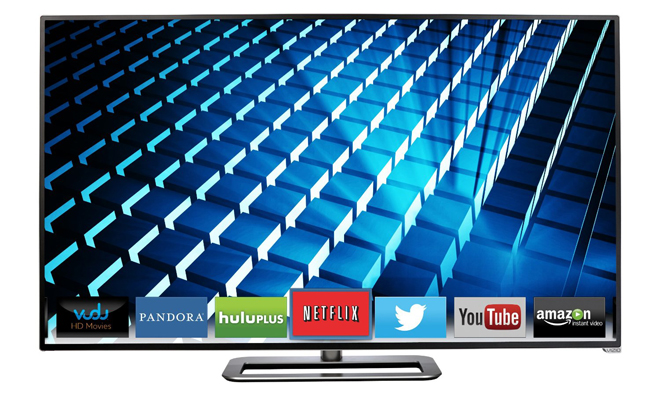 To show off the TV's picture quality, a sequence from 'The Hobbit' was displayed side-by-side with the same scene on the Samsung model. The Samsung unit uses edge-lit dimming and the difference was immediately clear. The full-array VIZIO offered a huge improvement in black levels and uniformity, providing deep, inky, even blacks that still maintained good shadow detail. Likewise, the black bars above and below the 2.35:1 frame essentially disappeared into the dark of the room. In contrast, the Samsung set displayed a comparatively washed-out grey and blue quality in its blacks, and the backlighting was uneven, resulting in isolated areas of the screen that were brighter than others (one of my main pet peeves when it comes to traditional LCDs). The VIZIO also did a solid job of maintaining its deep blacks and colors from off-angle, though I'd need more time with the unit to really offer a full judgment.

For the final part of the demo, VIZIO gave an example of the TV's Clear Action Rate 720 technology which is designed to create smooth motion without artifacts. A motion test was displayed on the M602i-B3 and UN60H7150 simultaneously with both set to their default movie mode. The test slide featured moving tickers of text and patterns. While the Samsung revealed heavy motion artifacts and anomalies, the VIZIO offered smooth motion with no apparent issues. The test was conducted in 60, 30, and 24 FPS and each time the VIZIO was smooth while the Samsung featured artifacts. Of course, the difference during actual content is likely far less severe than these specially designed tests slides, and more time with the unit is needed to really examine the difference the Clear Action tech makes. Likewise, many home theater enthusiasts detest the "soap opera" effect that is usually associated with technology like this, and prefer to keep these settings toggled off anyway. 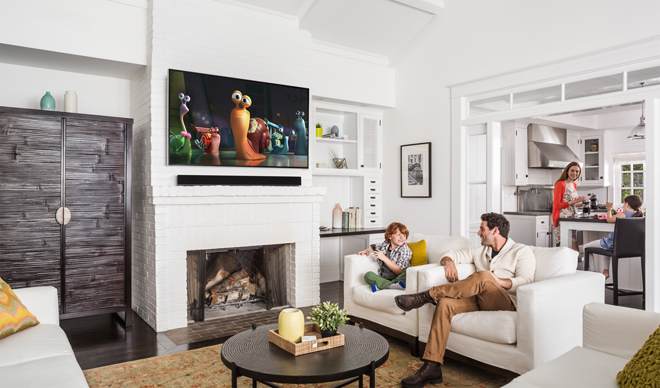 Again, though my time with the TV was limited, I was left very excited by what I saw and by VIZIO's overall philosophy. While the company is very popular among mainstream and budget consumers, this new M-Series line really seems to be going after home theater enthusiasts as well. By cutting out a lot of the fat and unnecessary features, VIZIO has been able to focus on picture quality improvements that matter, like full-array local dimming, while still giving customers a very affordable price point. With that said, the company has dropped 3D support from its line, citing low customer demand, so buyers still interested in 3D capabilities will have to look elsewhere. The 60-inch M602i-B3 is currently on sale for just $1,150. We're hoping to receive a full review unit of the M-Series TV soon, along with VIZIO's audio products, so be sure to stay tuned to High-Def Digest for more HD gear coverage!