The 1975 X-rated film is now available on Blu-ray.

Vinegar Syndrome is now shipping copies of China Girl on Blu-ray. Though the release date was set for March 28, Amazon now lists the title as in stock.

The Blu-ray/DVD combo pack will feature a transfer that was scanned and restored in 2k from the 16mm original camera negative and supplements include: Extensive Audio Interview with Actress Annette Haven, Reversible Cover Artwork, and the Original Theatrical Trailer.

You can find the latest specs for China Girl linked from our Blu-ray Release Schedule, where it's indexed under March 28. 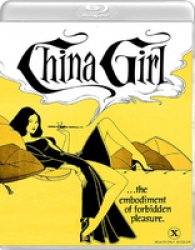 Discs mentioned in this article: (Click for specs and reviews)
China Girl (Blu-ray)