Three flicks from director David DeCoteau are heading to Blu-ray in October.

In an early announcement to retailers, Vinegar Syndrome is preparing 'Nightmare Sisters' and 'Murder Weapon / Deadly Embrace' for Blu-ray on October 25.

'Nightmare Sisters' - Three plain looking sorority sisters (Linnea Quigley, Brinke Stevens, and Michelle Bauer) decide to host a séance and invite their nerdy boyfriends to enjoy the fun. But when Omar (Dukey Flyswatter), a mystical shaman, suddenly appears in their crystal ball and tricks the girls into touching him, they're suddenly transformed into ravishing succubi, determined to suck more than just souls. Will the guys be able to stop the madness before it's too late? 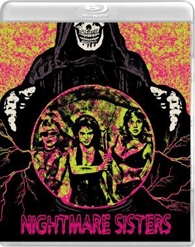 Then, in DEADLY EMBRACE, a lonely and under-sexed housewife hires a studly houseman, only to begin an affair with him. But when his actress girlfriend (Linnea Quigley) comes to visit, as well as her wealthy husband (Jan-Michael Vincent), things start happening that no one would have expected...

Never released theatrically, Vinegar Syndrome is proud to have restored these nudity and blood filled direct to video classics from their long lost 16mm camera negatives and bring them to Blu-ray for the first time.

Specs have not been detailed yet, but supplements will include: Commentary track with director David DeCoteau & actress Linnea Quigley on both films; Director introduction for both films; Video trailer for MURDER WEAPON; Outtakes for DEADLY EMBRACE; and Reversible cover artwork. 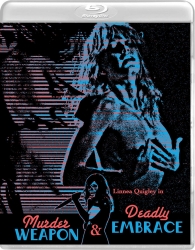 You can find the latest specs for 'Nightmare Sisters' and 'Murder Weapon / Deadly Embrace' linked from our Blu-ray Release Schedule, where they are indexed under October 25.