The 1987 horror comedy is planned for Blu-ray in February.

In an early announcement to retailers, Vinegar Syndrome is working on 'Slaughterhouse' for Blu-ray on February 28.

Lester Bacon's slaughterhouse has run into financial problems. Faced with the town lawyer, the sheriff, and the rival slaughterhouse owner trying to purchase his land, Lester decides to take matters into his own hands. After discovering the type of violence his hulking and mentally deranged son, Buddy, is capable of, Lester orders him to permanently dispose of anyone who conspires against them...

You can find the latest specs for 'Slaughterhouse' linked from our Blu-ray Release Schedule, where it is indexed under February 28. 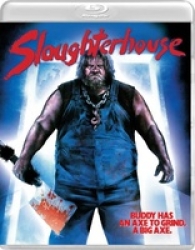