The 1983 horror flick will be making its way to Blu-ray at the end of March.

In an early announcement to retailers, Vinegar Syndrome has revealed that 'Frightmare' will hit Blu-ray on March 29.

Conrad Radzoff (Ferdy Mayne) was the biggest name in horror movies for decades until, one day, he died of a heart attack. Determined to celebrate his life, and death, the members of a local horror film society steal his freshly buried corpse and decide to host a party, in his honor, at their old and lavish mansion. Unaware that Radzoff's interest in horror extended beyond the silver screen and into the black arts, his corpse is soon re-animated and he begins exacting a bloody revenge against those who disturbed his final resting place.

Slyly combining 80s slasher tropes with an insightful and self reflective look at the meaning of horror movies and death itself, Norman Thaddeus Vane's FRIGHTMARE (originally known as THE HORROR STAR) is a quick witted and suspenseful tribute to classic horror cinema. With captivating cinematography by Joel King (JUST BEFORE DAWN) and supporting performances from Jeffrey Combs (RE-ANIMATOR), Luca Bercovici and Leon Askin, FRIGHTMARE has been newly restored from its original camera negative and is coming to Blu-ray for the very first time!

Specs have yet to be revealed, but the release will feature a new 2K restoration from the original 35mm negative and supplements will include: Video interview with cinematographer Joel King; Audio interview with director Norman Thaddeus Vane; Historical commentary with David DelValle and David Decoteau (RapidHeart.com); and Commentary with The Hysteria Continues & More!

You can find the latest specs for 'Frightmare' linked from our Blu-ray Release Schedule, where it is indexed under March 29. 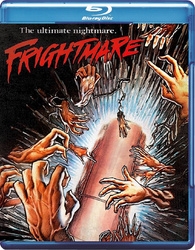