The horror flick will feed on Blu-ray in March.

In an early announcement to retailers, Vinegar Syndrome is preparing 'Pigs' for Blu-ray on March 29.

Lynn Webster is a mysterious and beautiful young woman with a deadly secret. After arriving in a secluded California town, she takes a job as a waitress for Zambrini (Marc Lawrence), an elderly former circus performer who runs a small cafe, complete with a pen of 12 hungry pigs. Local legend has it that his pigs only eat human flesh and that in order to satisfy their growing appetites, Zambrini has begun to murder drifters. Soon the sheriff (Jesse Vint) begins to get suspicious of the strange goings on at Zambrini's farm and grows closer and closer to discovering the shocking truth of the pigs.

Directed by character actor Marc Lawrence and starring his daughter Toni as Lynn. PIGS is a suspenseful and atmospheric psychological horror film featuring claustrophobic camerawork by Glenn Roland (Ilsa She Wolf of the S.S.) and a haunting score by Charles Bernstein (A Nightmare on Elm Street, Cujo).

Vinegar Syndrome presents this classic of 70s independent cinema newly restored and in its original director's cut for the first time on home video.

Specs have not been detailed yet, but supplements will include: Featurette with actress Toni Lawrence; Featurette with composer Charles Bernstein; Audio interview with cinematographer Glenn Roland; Two alternate openings and alternate ending; Gallery; Multiple trailers & more!

Suggested list price for the Blu-ray/DVD combo pack is $29.98.

You can find the latest specs for 'Pigs' linked from our Blu-ray Release Schedule, where it's indexed under March 29. 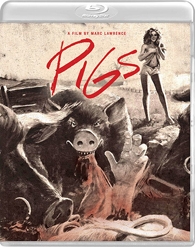 Discs mentioned in this article: (Click for specs and reviews)
Pigs (Blu-ray)