'Luther the Geek' Bound for Blu-ray

The bloody slasher flick will take a bite out of Blu-ray in January.

In an early announcement to retailers, Vinegar Syndrome is preparing 'Luther the Geek' for Blu-ray on January 19.

One night, when Luther was a boy, he discovered that there was something different about him - he enjoyed the taste of blood. Following in the footsteps of others like him, Luther became a geek: a deranged man who bites the heads off of live chickens in exchange for booze or money. Now, decades later, Luther is about to be paroled from prison and is ready to return to his home town, fitted with a set of razor sharp, metal teeth, and an unquenchable thirst for human blood...

Specs have not been announced yet, but supplements will include: Audio Commentary with Director Carlton Albright; Video Interview with actor Jerome Clarke; Outtakes / Deleted Shots; Reversible Cover Art; and Theatrical Trailer.

You can find the latest specs for 'Luther the Geek' linked from our Blu-ray Release Schedule, where it's indexed under January 19. 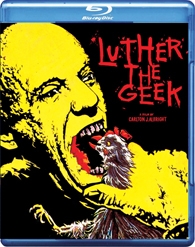 Discs mentioned in this article: (Click for specs and reviews)
Luther the Geek (Blu-ray)