The controversial 80s flick will arrive on Blu-ray in August.

In an early announcement to retailers, Vinegar Syndrome is preparing 'Taboo' for Blu-ray on August 30.

When Barbara Scott's (Kay Parker) husband leaves her, blaming her frigidity for destroying their marriage, she's left alone, without a source of income, and charged with taking care of their teenage son, Paul (Mike Ranger). Feeling vulnerable, she turns to her friend Gina (Juliet Anderson) who opens Barbara's eyes to the secret world of suburban swingers. But as erotic tension grows, Barbara begins to fantasize about her handsome son.. One of the most significant and controversial films ever made, Kirdy Stevens' TABOO became one of the biggest hits of the 80s, catapulting its star, Kay Parker, to international fame. Newly restored from rare 35mm vault elements, Vinegar Syndrome presents this landmark piece of underground cinema on Blu-ray for the first time anywhere in the world.

You can find the latest specs for 'Taboo' linked from our Blu-ray Release Schedule, where it's indexed under August 30. 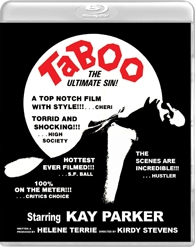 Discs mentioned in this article: (Click for specs and reviews)
Taboo (Blu-ray)