The 1997 horror-comedy is headed for high-definition in December.

As previously reported, Vinegar Syndrome is preparing 'Jack Frost' for Blu-ray on December 13.

On his way to be executed, the vehicle containing notorious serial killer Jack Frost collides with a hazardous chemical truck, turning Jack into a snow covered mutant and unleashing him on the unsuspecting town of Snomonton, 'The Snowman Capitol of the Midwest'. Jack immediately takes advantage of his newfound freedom and blizzardy abilities to seek revenge on the bungling Sheriff, played by Christopher Allport (TO LIVE AND DIE IN L.A.), that accidentally ended his cross-country killing spree. On his way to the Sheriff, Jack terrorizes the snow-man themed town and murders its residents in a variety of winterized ways. Can the residents of Snomonton fight back against the psychopath snowman from Hell or will they all end up in a snow-covered grave?

Co-starring the beautiful Shannon Elizabeth (AMERICAN PIE) in one of her most infamous and revealing roles, and featuring colorful cinematography by Dean Lent (BORDER RADIO), director Michael Cooney's staple of video stores and late night TV, is a gleefully gory horror comedy and is coming to Blu-ray for the first time, fully restored in 2k from Vinegar Syndrome.

The studio will also be offering a limited edition release with lenticular artwork by Chris Garofalo.

You can find the latest specs for 'Jack Frost' linked from our Blu-ray Release Schedule, where it is indexed under December 13. 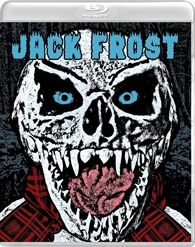 Discs mentioned in this article: (Click for specs and reviews)
Jack Frost (1997) (Blu-ray)