The 1978 killer bee film will be buzzing to Blu-ray next month.

In an early announcement to retailers, Vinegar Syndrome will be releasing 'The Bees' on Blu-ray on February 23.

Evil corporations have smuggled a deadly strain of South American killer bees into the United States and now the entire world may be on the brink of imminent destruction! As cities tumble, body counts rise, and mass hysteria ensues, scientist John Norman (John Saxon) thinks he might have discovered the secret strategy to stop THE BEES!

Directed by Alfredo Zacarias (DEMONOID) and co-starring Angel Tompkins, John Carradine, and Claudio Brook, THE BEES is an epic disaster film and drive-in classic, chock full of outrageous action and jaw-dropping plot twists. Vinegar Syndrome brings THE BEES into your living room, newly restored in 2k in its previously unavailable Director's Cut, and guaranteed to give you stingingly good entertainment.

The Blu-ray will feature a new 2K restoration from the 35mm negative, Reversible Cover Artwork; and supplements include: Video Interview with Director Alfredo Zacarias; and Original Theatrical Trailer.

You can find the latest specs for 'The Bees' linked from our Blu-ray Release Schedule, where it is indexed under February 23. 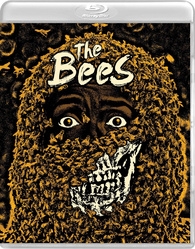