Bonus features have been revealed for the 1977 X-rated film getting the Blu-ray treatment in February.

As previously reported, Vinegar Syndrome is preparing 'Babyface' for Blu-ray, and now the date has been set for February 28.

Priscilla is a tease, flirting with every man she meets. When her mother catches her with Dan, a dockhand, Priscilla accuses the man of attacking her, resulting in a shoot out from which he's left for dead. However, Dan is quickly rescued by two women, who put him to work at an all male brothel with an exclusively female clientele. Becoming fast friends with the other 'studs', Dan soon finds a new home, that is, until he's warned about the notorious 'nutcracker'.

The release will feature a transfer scanned and restored in 2K from 35mm vault elements and supplements include: Extensive audio interview with actress Molly Seagrim; "Parochial Passion Princess" a short film by Alex de Renzy; and reversible cover artwork.

You can find the latest specs for 'Babyface' linked from our Blu-ray Release Schedule, where it is indexed under February 28. 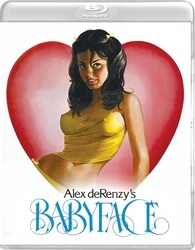