'A Walk Among the Tombstones' Blu-ray Up for Pre-Order!

The crime thriller starring Liam Neeson will hit Blu-ray soon, and you can pre-order the movie now.

In an early announcement to retailers, Universal is preparing 'A Walk Among the Tombstones' for Blu-ray in the near future.

Based on Lawrence Block's bestselling series of mystery novels, 'A Walk among the Tombstones' stars Liam Neeson as Matt Scudder, an ex-NYPD cop who now works as an unlicensed private investigator operating just outside the law. When Scudder reluctantly agrees to help a heroin trafficker (Dan Stevens) hunt down the men who kidnapped and then brutally murdered his wife, the PI learns that this is not the first time these men have committed this sort of twisted crime...nor will it be the last. Blurring the lines between right and wrong, Scudder races to track the deviants through the backstreets of New York City before they kill again.

Specs and supplements have not been announced yet, but suggested list price for the Blu-ray/DVD/Digital HD combo pack is $34.98.

You can find the latest specs for 'A Walk Among the Tombstones' linked from our Blu-ray Release Schedule, where it's indexed under PENDING. 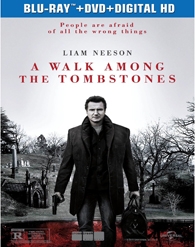 Discs mentioned in this article: (Click for specs and reviews)
A Walk Among the Tombstones (Blu-ray)