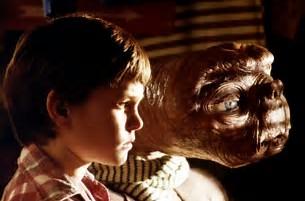 Two Steven Spielberg classics are heading to the 4K format this September.

Universal Studios is working on E.T.: The Extra-Terrestrial for 4K Ultra HD Blu-ray on September 12.

In 1982, acclaimed director Steven Spielberg created iconic movie magic with his classic film, E.T. The Extra-Terrestrial, the unforgettable and emotional adventure of an adorable alien lost on Earth and the lonely boy who befriends him. Winner of four Academy Awards®, including Best Music, E.T. The Extra-Terrestrial has become a cinematic touchstone for generations of moviegoers and one of the most beloved films of all time. Now, Universal Pictures Home Entertainment celebrates the film’s original theatrical release with a special gift set, E.T. The Extra-Terrestrial 35th Anniversary Limited Edition on 4K Ultra HD + Blu-ray™ + Digital available on September 12, 2017. This special gift set features premium packaging, includes a re-mastered CD soundtrack of the original Grammy Award®-winning album, is packed with over three hours of bonus features and includes a collector’s booklet with behind-the-scenes stories and rare images from the archives. This 35th Anniversary Limited Edition retains all the excitement, drama and warm-hearted humor that made it an instant worldwide classic. 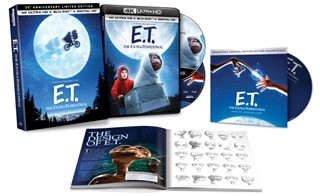 Fans can also relive the adventure and magic of one of the most beloved motion pictures of all-time, with the 4K Ultra HD Combo Pack along with the new Blu-ray™ Combo Pack and DVD editions that showcase new artwork of the beloved cast on September 12, 2017. All releases include a code to redeem the film on Digital plus over three hours of bonus features such as deleted scenes and revealing interviews that bring back the film’s humor, suspense and wonder, making this a must-own movie for everyone’s library.

Captivating audiences of all ages, this timeless story follows the unforgettable journey of a lost alien and the 10-year-old boy he befriends. Join Elliot (Henry Thomas), Gertie (Drew Barrymore) and Michael (Robert MacNaughton) as they come together to help E.T. find his way home. E.T. The Extra-Terrestrial is “one of the great American films” (Leonard Maltin) that forever belongs in the hearts and minds of audiences everywhere. Special features on this release include:

-Marketing E.T. A Look Back - A special insider’s look into the making of E.T. featuring interviews with Steven Spielberg, the cast, and others intimately involved with the film.

-The E.T. Reunion - The cast and filmmaker reunite to discuss their thoughts on the impact of the film.

-The 20th Anniversary Premiere - Composer John Williams played the score of E.T. live at the Shrine Auditorium for the re-release premiere of E.T.  This featurette gives us a behind the scenes look at this presentation.

Also, E.T. The Extra-Terrestrial returns to movie theaters nationwide for a two-day cinema event on Sunday, September 17, and Wednesday, September 20. These special event screenings will feature an exclusive commentary from TCM Primetime Host Ben Mankiewicz. Tickets and participating theaters are available at www.FathomEvents.com.

Richard Dreyfuss stars as cable worker Roy Neary, who along with several other stunned bystanders experience a close encounter of the first kind - witnessing UFOs soaring across the sky. After this life-changing event, the inexplicable vision of a strange, mountain-like formation haunts him. He becomes obsessed with discovering what it represents, much to the dismay of his wife and family. Meanwhile, bizarre occurrences are happening around the world. Government agents have close encounters of the second kind - discovering physical evidence of extraterrestrial visitors in the form of a lost fighter aircraft from World War II and a stranded military ship that disappeared decades earlier only to suddenly reappear in unusual places. Roy continues to chase his vision to a remote area where he and the agents follow the clues that have drawn them to reach a site where they will have a close encounter of the third kind - contact.

Close Encounters of the Third Kind is presented with an all-new 4K restoration, fully restored from the 35mm original camera negative, thereby utilizing in 4K the full resolution, detail and color depth inherent in the film. 4K Blu-ray brings the full power of this restoration into the home, featuring four times the resolution of high definition, high dynamic range (HDR)--which produces brilliant highlights, vibrant colors and greater contrast on compatible displays. The Blu-ray will also utilize this new restoration at HD resolution. Both 4K Blu-ray and Blu-ray versions will feature all three versions of the movie and the original restored 5.1 DTS-HD Master Audio.

Both Blu-ray and 4K Ultra HD releases include all three restored versions of the film, including the 1977 theatrical version, the 1980 Special Edition and the 1997 Director's Cut.

There will also be a 4K Blu-ray Gift Set that lights up and plays the iconic 5-tone theme and also includes a 64-page booklet with rare photos from the film's production.