'We're Back! A Dinosaur's Story' Dated for Blu-ray

The 1993 animated adventure will make its Blu-ray debut in November.

In an early announcement to retailers, Universal will be bringing 'We're Back! A Dinosaur's Story' to Blu-ray on November 17.

A DINOSAUR ADVENTURE FOR THE WHOLE FAMILY!   For every kid who ever wanted to meet a real dinosaur, Steven Spielberg presents We're Back! A Dinosaur's Story – the animated tale of four prehistoric pals in the most awesome adventure since the dawn of time! Join Rex, Woog, Elsa and Dweeb as they time-travel to New York City to meet their biggest fans – modern-day kids – and make all of their wildest dreams come true. Featuring the voices of John Goodman (The Flintstones), Jay Leno (The Tonight Show), Martin Short (A Simple Wish) and Rhea Perlman (Cheers), We're Back! A Dinosaur's Story is a magical film the whole family will enjoy.

You can find the latest specs for 'We're Back! A Dinosaur's Story' linked from our Blu-ray Release Schedule, where it is indexed under November 17. 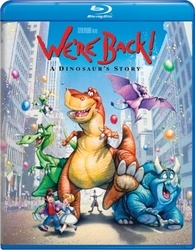