The horror sequel will terrify Blu-ray in January.

In an early announcement to retailers, Universal is preparing 'Sinister 2' for Blu-ray on January 12.

Following the events from the first film, a different family; a mother and her 2 sons move into a rural house that's marked for death. When the deputy from the first film learns that this family is next in line to fall to the demon Bhughul, he races before time to stop it and save them from the same fate.

The Blu-ray/Digital HD combo pack will feature 1080p video, a DTS-HD MA 5.1 soundtrack, and supplements will include: Extended Kill Films; Time to Watch Another: The Making of Sinister 2; and Feature Commentary with Director Ciaran Foy.

You can find the latest specs for 'Sinister 2' linked from our Blu-ray Release Schedule, where it's indexed under January 12. 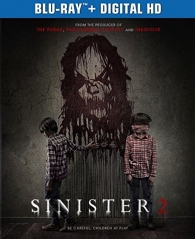 Discs mentioned in this article: (Click for specs and reviews)
Sinister 2 (Blu-ray)