The latest entry in the 'Honey' franchise is dancing toward Blu-ray in September.

In an early announcement to retailers, Universal is preparing 'Honey 3: Dare to Dance' for Blu-ray on September 6.

At a prestigious South African school, Melea and her boyfriend imagine a hip-hop version of Romeo and Juliet, but Melea's dreams are dashed when she's unable to pay tuition and is forced to leave. Determined to fulfill her destiny, she does the unthinkable – persuades the community to support her artistic and unique vision. When adrenaline-filled rehearsals cause dance crew rivals and egos to get in the way, everything falls apart. Once again, Melea dares to dream and risks it all to put on a performance you'll never forget. From the director of Honey and Honey 2, Honey 3 is full of dance, romantic love triangles and heart-pumping music you won't want to miss.

You can find the latest specs for 'Honey 3: Dare to Dance' linked from our Blu-ray Release Schedule, where it's indexed under September 6. 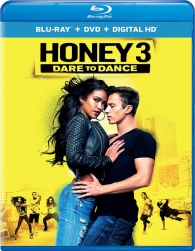 Discs mentioned in this article: (Click for specs and reviews)
Honey 3: Dare to Dance (Blu-ray)