The action sequel will fight for survival on Blu-ray in September.

In an early announcement to retailers, Universal is preparing 'Hard Target 2' for Blu-ray on September 6.

Disgraced and retired mixed martial artist Wes "The Jailor" Baylor (Scott Adkins) couldn't refuse the million dollar purse offered to fight in Myanmar. When he arrives to fight, he learns he's been tricked into becoming the target of a human hunt. Carrying only water and a ruby-filled money belt for the last person standing, Wes must outsmart the heavily armed group who's paid to kill him. As Wes fights for his life in the treacherous jungle terrain, the hunters become the hunted. Hard Target 2 is a must see film for action and martial arts fans featuring Adkins in incredible fight scenes.

The Blu-ray/DVD/Digital HD combo pack will feature 1080p video, a DTS-HD MA 5.1 soundtrack, and supplements will include: Deleted Scenes; Deleted Shots Montage; A Fighting Chance: Behind-the-Scenes of Hard Target 2; Hard Target 2 Through the Lens; Into the Jungle: On Location of Hard Target 2; Thrill of the Hunt; and Feature Commentary with Director Roel Reiné and Stars Scott Adkins and Robert Knepper, Composer Trevor Morris, and Camera Operator Rolf Dekens.

You can find the latest specs for 'Hard Target 2' linked from our Blu-ray Release Schedule, where it's indexed under September 6. 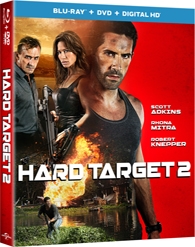 Discs mentioned in this article: (Click for specs and reviews)
Hard Target 2 (Blu-ray)