The latest entry in the 'Purge' franchise will wreak havoc on Blu-ray in October.

In an early announcement to retailers, Universal is preparing 'The Purge: Election Year' for Blu-ray on October 4.

It has been two years since Leo Barnes (Frank Grillo) stopped himself from a regrettable act of revenge on Purge Night - the 12 hours of lawlessness. This year, the annual ritual comes at the eve of a heated presidential election with the nation deeply divided between those who are pro-­ and anti-­Purge. As head of security for Senator Charlie Roan (Elizabeth Mitchell), Leo's mission is to protect her during her controversial and contested run for president. But when a betrayal forces them onto the streets of Washington, D.C. on the one night when no help is available, they must stay alive or both be sacrificed for their sins against the state.

The Blu-ray will feature 1080p video, a DTS-HD MA 5.1 soundtrack, and supplements will include: Deleted Scenes; Inside The Purge - Featurette; and Character Spotlight: Leo - Featurette.
Suggested list price for the Blu-ray is $34.98.
You can find the latest specs for 'The Purge: Election Year' linked from our Blu-ray Release Schedule, where it's indexed under October 4. 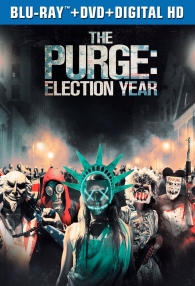 Discs mentioned in this article: (Click for specs and reviews)
The Purge: Election Year (Blu-ray)