The animated film is heading to Blu-ray in September.

In an early announcement to retailers, Universal is preparing 'Monster High: Welcome to Monster High' for Blu-ray on September 27.

Monsters once lived in hiding—even from each other—because they were afraid they would be in danger if humans knew they existed. But Draculaura, the daughter of Dracula, along with her best ghoulfriends, dreamt of a school where everyone was welcome and accepted for who they are. Determined to make their dream come true, the ghouls travel the world on an epic adventure to recruit new students. But even in this amazing place, there's drama: a villainess zombie is spreading trouble rather than friendship, and every student must live with the fear that their secret will be revealed. Now the ghouls must save their school so that every monster has a place where they belong and their uniqueness is celebrated!

The Blu-ray will feature 1080p video, a DTS-HD MA 5.1 soundtrack, and supplements will include: Ever After High: Dragon Games – "Shatter the Mirror."

You can find the latest specs for 'Monster High: Welcome to Monster High' linked from our Blu-ray Release Schedule, where it's indexed under September 27. 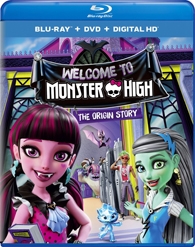