The drama starring Viggo Mortensen will arrive on Blu-ray in October.

In an early announcement to retailers, Universal is preparing 'Captain Fantastic' for Blu-ray on October 25.

Deep in the forests of the Pacific Northwest, isolated from society, a devoted father (Viggo Mortensen) dedicates his life to transforming his six young children into extraordinary adults. But when a tragedy strikes the family, they are forced to leave this self-created paradise and begin a journey into the outside world that challenges his idea of what it means to be a parent and brings into question everything he's taught them.

The Blu-ray will feature 1080p video, a DTS-HD MA 5.1 soundtrack, and supplements will include "Insane or Insanely Great?" featurette.
Suggested list price for the Blu-ray is $34.98.

You can find the latest specs for 'Captain Fantastic' linked from our Blu-ray Release Schedule, where it's indexed under October 25. 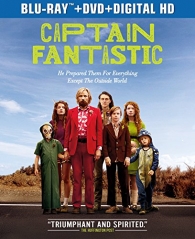 Discs mentioned in this article: (Click for specs and reviews)
Captain Fantastic (Blu-ray)