The 2014 fantastical adventure sets sail to Blu-ray in March.

In an early announcement to retailers, Universal Studios will be releasing 'Song of the Sea' on Blu-ray on March 17.

From the writer and director of the Academy Award-nominated The Secret of Kells comes an enchanting fable about loss, magic and the love of family. When Saoirse and Ben's mother mysteriously disappears into the ocean, the two children go on an epic journey to find out the truth about her, and in the process, discover mystical secrets about both their mother and Saoirse herself. The film's voice talent includes Brendan Gleeson and Fionnula Flanagan.

You can find the latest specs for 'Song of the Sea' linked from our Blu-ray Release Schedule, where it is indexed under March 17. 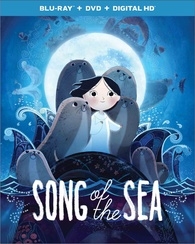