The drama starring Eddie Redmayne and Alicia Vikander will arrive on Blu-ray in March.

In an early announcement to retailers, Universal is preparing 'The Danish Girl' for Blu-ray on March 1.

Academy Award winner Eddie Redmayne and Alicia Vikander star in this remarkable love story inspired by true events from Oscar-winning director Tom Hooper. When Gerda (Vikander) asks her husband Einar Wegener (Redmayne) to fill in as a portrait model, Einar's long-repressed feelings surface and she begins living her life as a woman. Embarking on a groundbreaking journey that's only made possible by the unconditional love of her wife, Einar fights to become the person she's meant to be, transgender pioneer Lili Elbe.

The Blu-ray/Digital HD combo pack will feature 1080p video, a DTS-HD MA 5.1 soundtrack, and supplements will include: The Making of The Danish Girl.

You can find the latest specs for 'The Danish Girl' linked from our Blu-ray Release Schedule, where it's indexed under March 1. 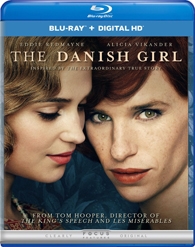 Discs mentioned in this article: (Click for specs and reviews)
The Danish Girl (Blu-ray)