The thriller starring Amy Adams and Jake Gyllenhaal will arrive on Blu-ray in February.

In an early announcement to retailers, Universal is preparing 'Nocturnal Animals' for Blu-ray on February 21.

Academy Award nominees Amy Adams and Jake Gyllenhaal star in this haunting romantic thriller from acclaimed writer/director Tom Ford (A Single Man). Susan (Amy Adams) is living through an unfulfilling marriage when she receives a package containing a novel manuscript from her ex-husband, Edward (Jake Gyllenhaal). The novel is dedicated to her but its content is violent and devastating. Susan cannot help but reminisce over her past love story with the author. Increasingly she interprets the book as a tale of revenge, a tale that forces her to re-evaluate the choices that she has made, and reawakens a love that she feared was lost. Also starring Armie Hammer and Michael Shannon, Nocturnal Animals is a thriller of shocking intimacy and gripping tension.

The Blu-ray will feature 1080p video, a DTS-HD MA 5.1 soundtrack, and supplements will include: The Making of Nocturnal Animals.

You can find the latest specs for 'Nocturnal Animals' linked from our Blu-ray Release Schedule, where it's indexed under February 21. 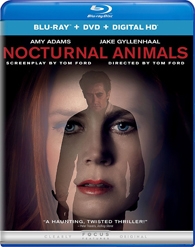 Discs mentioned in this article: (Click for specs and reviews)
Nocturnal Animals (Blu-ray)