Tina Fey and Amy Poehler Are 'Sisters' on Blu-ray

The unrated comedy will arrive on Blu-ray in March.

In an early announcement to retailers, Universal will be releasing 'Sisters' on Blu-ray on March 15.

Tina Fey (TV’s Saturday Night Live, 30 Rock) and Amy Poehler (TV’s Saturday Night Live, Parks and Recreation) reunite in Sisters, the story of two disconnected sisters summoned home to clean out their childhood bedroom before their parents sell the family house. Looking to recapture their glory days, they throw one final high-school-style party for their classmates, which turns into the cathartic rager that a bunch of ground-down adults really need. Critics say Sisters is “hilarious, heartfelt, & downright dysfunctional.” – Ramascreen.com

Blu-ray exclusives include: How to Throw a Party; Grown-Up Parties Suck; The Alex Chronicles; The Kate And Pazuzu Chronicles; A Teen Movie … For Adults; The Original Sister; and Pool Collapse Visual Effects.

You can find the latest specs for 'Sisters' linked from our Blu-ray Release Schedule, where it is indexed under March 15. 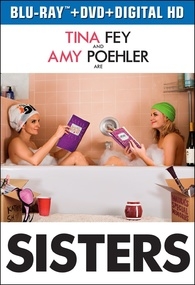