Time to Send Out a 'Search Party' on Blu-ray

The raucous new comedy from one of the guys that brought you 'Old School' and 'Road Trip' is planned for Blu-ray next month.

In an early announcement to retailers, Universal will be releasing 'Search Party' on Blu-ray on July 5.

When the love of his life (Shannon Woodward of Raising Hope) jilts Nadro (Middleditch) at the altar thanks to his hard-partying pals Jason (Miller) and Evan (Pally), he follows her down to Mexico – where he’s carjacked and left naked in the middle of nowhere. Reluctantly summoning his friends to help him get back his runaway bride-to-be, Nadro plunges into an escalating series of outrageous misadventures courtesy of the guys who created the mess in the first place. The raucous comedy also stars Alison Brie (Community) and Krysten Ritter (Marvel’s Jessica Jones).

The Blu-ray will feature 1080p video, a lossless 5.1 soundtrack, and there doesn't appear to be any supplements on this release.

You can find the latest specs for 'Search Party' linked from our Blu-ray Release Schedule, where it is indexed under July 5. 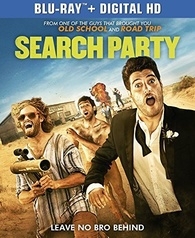