The super-powered miniseries will arrive on Blu-ray in April.

In an early announcement to retailers, Universal will be releasing 'Heroes Reborn: Event Series' on Blu-ray on April 12.

Experience the epic 13-episode event series, Heroes Reborn, from Tim Kring, the creator of the global phenomenon, Heroes. Kring creates a wildly imaginative and thrilling new volume in the Heroes universe featuring a host of new characters with startling powers.

After a massive terrorist attack in Odessa, Texas, evolved humans are blamed for the tragic event, forcing them into hiding or on the run from those seeking retribution. The conflict between humans and evolved humans - dubbed "Evos" - escalates into all out civil warfare. Timely, thought-provoking, and startling inventive, Heroes Reborn recaptures the magic of the original series and lays the foundation for the next volume in the Heroes mythology.

You can find the latest specs for 'Heroes Reborn: Event Series' linked from our Blu-ray Release Schedule, where it is indexed under April 12. 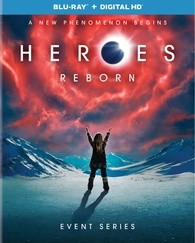