Ti West's 'In a Valley of Violence' Planned for Blu-ray

The western starring Ethan Hawke and John Travolta will hit Blu-ray in December.

In an early announcement to retailers, Universal is preparing 'In a Valley of Violence' for Blu-ray on December 27.

Ethan Hawke stars as Paul, a lone drifter who wanders into the forgotten town of Denton, Texas – dubbed by locals as the "valley of violence." There, he picks a fight with the wrong man, Gilly (James Ransone), the troublemaking son of the town's unforgiving marshal (John Travolta, Pulp Fiction). As tensions arise between Paul and Gilly, an inevitable act of violence starts a disastrous chain reaction that quickly drags the whole town into the bloody crosshairs of revenge. Only the world-weary marshal struggles to stop the violent hysteria, but after a gruesome discovery about Paul's past…there's no stopping the escalation.

The Blu-ray will feature 1080p video, 5.1 audio, and supplements include Behind the Scenes of In A Valley of Violence.

You can find the latest specs for 'In a Valley of Violence' linked from our Blu-ray Release Schedule, where it is indexed under December 27. 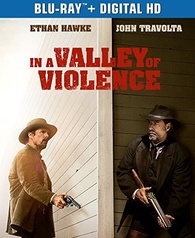