Those Crazy 'Minions' Are Planning Their Big Return to Blu-ray and Blu-ray 3D!

The animated comedy will arrive on both formats in December.

In an early announcement to retailers, Universal will be releasing 'Minions' on Blu-ray and Blu-ray 3D on December 8.

The story of Universal Pictures and Illumination Entertainment's Minions begins at the dawn of time. Starting as single-celled yellow organisms, Minions evolve through the ages, perpetually serving the most despicable of masters. Continuously unsuccessful at keeping these masters—from T. rex to Napoleon—the Minions find themselves without someone to serve and fall into a deep depression. But one Minion named Kevin has a plan, and he—alongside teenage rebel Stuart and lovable little Bob—ventures out into the world to find a new evil boss for his brethren to follow. The trio embark upon a thrilling journey that ultimately leads them to their next potential master, Scarlet Overkill (Academy Award-winner Sandra Bullock), the world's first-ever female super-villain. They travel from frigid Antarctica to 1960s New York City, ending in 'mod' London, where they must face their biggest challenge to date: saving all of Minionkind...from annihilation.

The releases will feature 1080p video, Dolby Atmos audio, and supplements include: Three All New Original Mini-movies; Deleted Scene – Me, Myself And Stuart; Around The World Interactive Map; Behind The Goggles – The Illumination Story Of The Minions – Get a "behind the googles" look at the history and evolution of everyone's favorite yellow henchmen; Illumination Macguff Animation; Lighting, Layout and Effects - A look at the ways in which layout and lighting plays a big role in the emotion and motivation in the movie. Also see the ways in which they try to keep the 60's vintage look and the challenges they face with very technical shots, where one shot can take weeks; Jingle Bells Minion Style - This holiday favorite is brought to life in a merry-Minion way. Now you get to sing along to the beloved video that was the most shared piece of content on Facebook in 2014; and The Secret Life of Pets Theatrical Trailer.

You can find the latest specs for 'Minions' linked from our Blu-ray Release Schedule, where it is indexed under December 8. 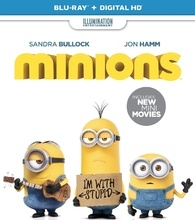 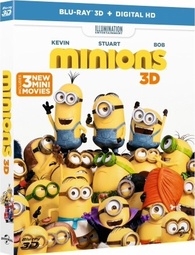