'The Space Between Us' Bound for Blu-ray

Peter Chelsom's sci-fi romance is rocketing toward Blu-ray in May.

In an early announcement to retailers, Universal is preparing 'The Space Between Us' for Blu-ray on May 16.

Sixteen-year-old Gardner Elliot (Asa Butterfield) has lived his whole life with a team of scientists on Mars. He's always longed to see Earth to find the father he's never known and to meet a beautiful street-smart girl named Tulsa he's become friends with online. But when his chance finally comes, doctors discover his heart can't withstand the Earth's atmosphere. Eager to find his father, Gardner and Tulsa escape on a cross-country race against time to unravel the mysteries of how he came to be and where he belongs in the universe. Gary Oldman and Carla Gugino also star in this heartfelt and inspiring romantic adventure about how far one person can go for love.

You can find the latest specs for 'The Space Between Us' linked from our Blu-ray Release Schedule where it's indexed under May 16. 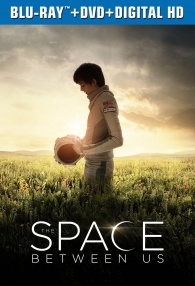 Discs mentioned in this article: (Click for specs and reviews)
The Space Between Us (Blu-ray)