In an early announcement to retailers, Universal Studios is working on 'Silent Running' for Blu-ray on April 7.

Botanist Freeman Lowell (Dern) has spent eight years aboard the space freighter Valley Forge preserving the only botanical specimens left from Earth under huge geodesic domes. When he receives orders to destroy the project and return home, Lowell rebels and hijacks the freighter, while plunging the craft into the gaseous rings of Saturn. From that moment on, he has only the trees, the gardens and two "Drone" robots, Huey and Dewey, to keep him company on his greatest adventure of all.

You can find the latest specs for 'Silent Running' linked from our Blu-ray Release Schedule, where it is indexed under April 7. 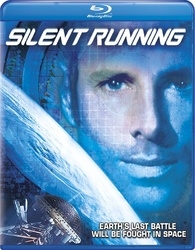