The sequel to 'The Purge' is bound for Blu-ray in October. Pre-order here.

In an early announcement to retailers, Universal says 'The Purge: Anarchy' will arrive on Blu-ray on October 21.

The New Founders of America invite you to celebrate your annual right to Purge. The Purge: Anarchy takes it to the streets for the country's yearly 12 hours of anarchy, when all crime is legal. This new story follows an unlikely group of five strangers over the course of the night. As they fight to survive a night fraught with impossible decisions, these strangers will find out just how far they will go to protect themselves and, ultimately, each other.

The Blu-ray/DVD/Digital Copy combo pack will feature 1080p video, a lossless 5.1 soundtrack, and supplements include Behind the Anarchy.

You can find the latest specs for 'The Purge: Anarchy' linked from our Blu-ray Release Schedule, where it's indexed under October 21. 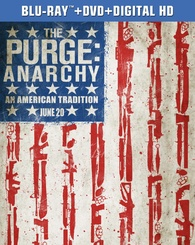