'The Man with the Iron Fists 2: The Sting of the Scorpion' Starring RZA Dated and Detailed for Blu-ray

The action-packed sequel is headed for Blu-ray in April.

In an early announcement to retailers, Universal Studios is working on 'The Man with the Iron Fists 2: The Sting of the Scorpion' for Blu-ray on April 14.

On the hunt for a fabled treasure of gold, a band of warriors, assassins, and a rogue British soldier descend upon a village in feudal China, where a humble blacksmith (RZA) looks to defend himself and his fellow villagers.

The Blu-ray/DVD/Digital Copy combo pack will include both the Rated and Unrated Cuts of the Film and will feature 1080p video, a lossless 5.1 soundtrack, and supplements include: Feature Commentary with Director Roel Reiné and Executive Producer/Co-Writer/Star Rza (Both Versions); Chi Warriors: The Making of The Man with the Iron Fists 2, and Deleted Scenes.

You can find the latest specs for 'The Man with the Iron Fists 2: The Sting of the Scorpion' linked from our Blu-ray Release Schedule, where it is indexed under April 14. 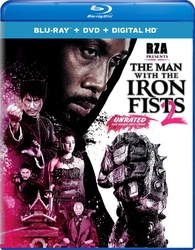