Director Erik Van Looy's thriller is heading to Blu-ray in May, and you can pre-order the movie here.

In an early announcement to retailers, Universal is preparing 'The Loft' for Blu-ray on May 26.

Five married guys conspire to secretly share a penthouse loft in the city--a place where they can carry out hidden affairs and indulge in their deepest fantasies. But the fantasy becomes a nightmare when they discover the dead body of an unknown woman in the loft, and they realize one of the group must be involved.

You can find the latest specs for 'The Loft' linked from our Blu-ray Release Schedule, where it's indexed under May 26. 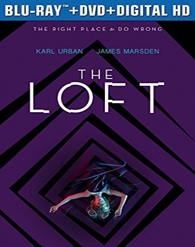 Discs mentioned in this article: (Click for specs and reviews)
The Loft (Blu-ray)