In an early announcement to retailers, Universal says 'Get On Up' will arrive on Blu-ray on January 6.

Based on the incredible life story of the Godfather of Soul, Get On Up gives a fearless look inside the music, moves, and moods of James Brown (Boseman), taking audiences on the journey from his impoverished childhood to his evolution into one of the most influential figures of the 20th century.

The Blu-ray will feature 1080p video, a lossless 5.1 soundtrack, and supplements will include Behind The Scenes, Visual Effects, and a trailer.

You can find the latest specs for 'Get On Up' linked from our Blu-ray Release Schedule, where it is indexed under January 6. 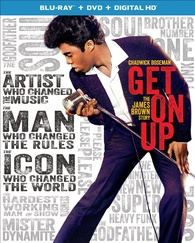