Director Pierre Morel's latest action flick is coming to Blu-ray later this year, and you can pre-order the disc now.

In an early announcement to retailers, Universal is preparing 'The Gunman' for Blu-ray in the near future.

Sean Penn stars as a former Special Forces soldier and military contractor suffering from PTSD. He tries to reconnect with his long time love, but first must go on the run from London to Barcelona and across Europe in order to clear his name. The film also stars Javier Bardem, Idris Elba, Ray Winstone, Mark Rylance and Jasmine Trinca.

You can find the latest specs for 'The Gunman' linked from our Blu-ray Release Schedule, where it's indexed under PENDING. 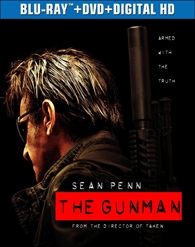 Discs mentioned in this article: (Click for specs and reviews)
The Gunman (Blu-ray)