The Graboids Are Back in 'Tremors 5: Bloodlines' on Blu-ray this October

The fifth chapter in the giant burrowing worm franchise will tunnel to Blu-ray in October.

In an early announcement to retailers, Universal will be releasing 'Tremors 5: Bloodlines' on Blu-ray on October 6.

The stakes are raised for survivalist Burt Gummer (Michael Gross) in his most dangerous monster hunt yet. When Gummer's hired to capture a deadly Assblaster terrorizing South Africa, he and his new sidekick, Travis Welker (Jamie Kennedy), find themselves in a battle to the death against the fiercely aggressive Assblasters and Graboids. Discovering that the monsters have evolved into even more lethal creatures, their mission takes on a whole new level of unseen terror -- far more than they bargained for.

The Blu-ray combo pack will feature 1080p video, a lossless 5.1 soundtrack, and supplements include: Deleted And Extended Scenes, Outtakes, and Tremors 5: Behind The Bloodlines featurette.

You can find the latest specs for 'Tremors 5: Bloodlines' linked from our Blu-ray Release Schedule, where it is indexed under October 6. 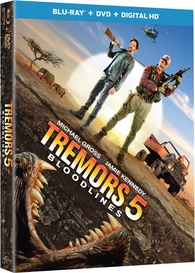