'The Gift' from Writer/Director Joel Edgerton Planned for Blu-ray

The mysterious thriller starring Edgerton, Rebecca Hall, and Jason Bateman will be unwrapped on Blu-ray this October.

In an early announcement to retailers, Universal says 'The Gift' will be delivered to Blu-ray on October 27.

The Gift asks the question, "Can you really go through life having never wronged anyone?" Simon (Jason Bateman) and Robyn (Rebecca Hall) are a young married couple whose life is going as planned until a chance run-in with Simon's high-school acquaintance sends their world into a narrowing tailspin. At first Simon doesn't recognize Gordo (Joel Edgerton), but after a series of uninvited encounters and mysterious gifts prove troubling, a horrifying secret from the past is uncovered after more than 20 years. As Robyn learns the unsettling truth about what happened between Simon and Gordo, she is forced to contemplate: how well do we really know those closest to us, and are bygones ever really bygones?

You can find the latest specs for 'The Gift' linked from our Blu-ray Release Schedule, where it is indexed under October 27. 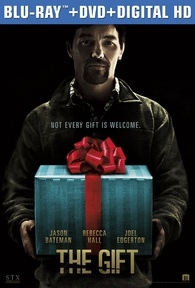