'The Edge of Seventeen' Blu-ray Announced

The coming-of-age film will hit Blu-ray in February.

In an early announcement to retailers, Universal says 'The Edge of Seventeen' will be available on Blu-ray on February 14.

The Edge of Seventeen follows awkward teenager Nadine (Hailee Steinfeld) as she navigates her way into adulthood with her best friend Krista (Hayley Lu Richardson) and her brother Darian (Blake Jenner). The film also stars Woody Harrelson as Mr. Bruner, Nadine's reluctant mentor, and Kyra Sedgewick as her well-meaning but distracted mother.

The combo pack will feature 1080p video, lossless 5.1 audio, and supplements include: Actor & Filmmaker Roundtable and a Gag Reel.

You can find the latest specs for 'The Edge of Seventeen' linked from our Blu-ray Release Schedule, where it is indexed under February 14. 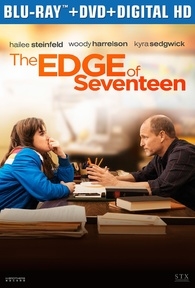