The Critically-Acclaimed 'Mr. Robot: Season One' Headed for Blu-ray

The first season of the hit series starring Rami Malek and Christian Slater will arrive on Blu-ray in January.

In an early announcement to retailers, Universal will be releasing 'Mr. Robot: Season One' on Blu-ray on January 12.

Cyber security engineer by day and vigilante hacker by night, Elliot (Rami Malek, The Pacific) finds himself at a crossroads when the mysterious leader of an underground hacker group (Christian Slater, Nymphomaniac) recruits him to destroy the firm he’s paid to protect. Compelled by his personal beliefs, Elliot struggles to resist the chance to take down the multinational CEOs he believes are running (and ruining) the world. MR. ROBOT also stars Carly Chaikin (Suburgatory), Portia Doubleday (Her) and Martin Wallström (Simple Simon).

MR. ROBOT won over audiences at this year’s South By Southwest Festival in March, winning the coveted audience award in the Episodics category. The series was also named an official selection of the 2015 Tribeca Film Festival in April and nominated for IFP’s Gotham Awards new ‘Breakthrough Series’ category in October.

Specs haven't been revealed yet, but supplements include a making-of featurette, deleted scenes, and a gag reel.

You can find the latest specs for 'Mr. Robot: Season One' linked from our Blu-ray Release Schedule, where it is indexed under January 12. 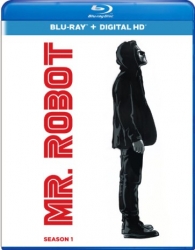