In an early announcement to retailers, Universal is working on 'The Constant Gardener' for Blu-ray on January 6.

Nominated for four Academy Awards, The Constant Gardener stars Ralph Fiennes and Academy Award winner for Best Supporting Actress, Rachel Weisz. In this gripping suspense-thriller, a diplomat on the hunt for his wife's murderer uncovers a treacherous conspiracy that will destroy millions of innocent people – unless he can reveal its sinister roots. From the best-selling spy novel by John le Carré comes this edge-of-your-seat story of murder, deception and revenge that critics are calling "a hair-raising thriller with an unforgettable finale" (Karen Durbin, Elle).

The Blu-ray will feature 1080p video, lossless 5.1 audio, and supplements include: Anatomy of a Global Thriller: Behind the Scenes of The Constant Gardener; John Le Carré: From Page to the Screen; Deleted Scenes/Extended Scene: Haruma – Play in Kibera; and Embracing Africa: Filming in Kenya.

You can find the latest specs for 'The Constant Gardener' linked from our Blu-ray Release Schedule, where it's indexed under December 9. 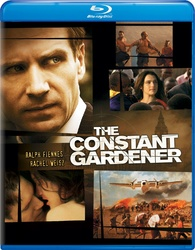