'The Bye Bye Man' Dated and Detailed for Blu-ray

The 2016 horror film will wave to Blu-ray in April.

In an early announcement to retailers, Universal Studios is preparing 'The Bye Bye Man' for Blu-ray on April 25.

From the producer of Oculus and The Strangers comes The Bye Bye Man. When three college friends stumble upon the horrific origins of the Bye Bye Man, they discover that there is only one way to avoid his curse: don't think it, don't say it. But once the Bye Bye Man gets inside your head, he takes control, making you see and do the most unspeakable acts committed by man. Is there a way to survive his possession? Starring Douglas Smith (Ouija) and Carrie Anne-Moss (The Matrix), see the chilling thriller that critics are calling "a paranormal thrill ride that will echo in your nightmares" (Elizabeth Rayne, Den Of Geek).

You can find the latest specs for 'The Bye Bye Man' linked from our Blu-ray Release Schedule, where it is indexed under April 25. 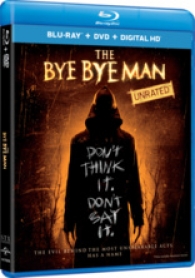