The John Hughes' classic will be receiving a 30th anniversary Blu-ray release in March.

In an early announcement to retailers, Universal Studios will be releasing 'The Breakfast Club: 30th Anniversary Edition' on Blu-ray on March 10.

They were five students with nothing in common, faced with spending a Saturday detention together in their high school library. At 7 a.m., they had nothing to say, but by 4 p.m. they had bared their souls to each other and become good friends. John Hughes creator of the critically acclaimed Sixteen Candles, wrote, directed and produced this hilarious and often touching comedy starring Emilio Estevez, Anthony Michael Hall, Judd Nelson, Molly Ringwald and Ally Sheedy. To the outside world they were simply the Jock, the Brain, the Criminal, the Princess and the Kook, but to each other, they would always be The Breakfast Club.

The film has been digitally remastered and fully restored from 35mm original film elements for this release and supplements will include: Accepting the Facts: The Breakfast Club Trivia Track, Sincerely Yours, The Most Convenient Definitions: The Origins of The Brat Pack, Theatrical Trailer, and Feature Commentary with Anthony Michael Hall and Judd Nelson.

You can find the latest specs for 'The Breakfast Club: 30th Anniversary Edition' linked from our Blu-ray Release Schedule, where it is indexed under March 10. 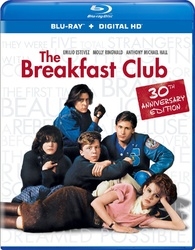