The Adventure/Fantasy 'Dragonheart 3: The Sorcerer’s Curse' Announced for Blu-ray

In an early announcement to retailers, Universal says 'Dragonheart 3: The Sorcerer’s Curse' will arrive on Blu-ray on February 24.

In Dragonheart 3: The Sorcerer’s Curse aspiring knight Gareth goes in search of a fallen comet rumored to contain gold and is shocked to instead find the dragon Drago. After Drago saves Gareth’s life the two become intricately bonded, and must work together to defeat an evil sorcerer and stop his reign of terror. Along the way, Gareth learns the true meaning of being a knight in this action adventure for the ages!

The Blu-ray will feature 1080p video, a lossless 5.1 soundtrack, and supplements will include: A Dragon’s Life – a behind-the-scenes featurette with Ben Kingsley.

Suggested list price for the Blu-ray combo pack is $34.98.

You can find the latest specs for 'Dragonheart 3: The Sorcerer’s Curse' linked from our Blu-ray Release Schedule, where it's indexed under February 24. 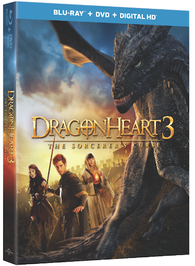